The Marne river is an important tributary of the Seine river in France and its surveillance is achieved by SPC SAMA (Seine Amont Marne Amont). Its source is located on the Langres plateau in the Haute-Marne department. A mono-dimensional hydraulic model (MASCARET) is used to simulate the hydrodynamics of 180-km upstream the Marne river where flash floods frequently occur; for instance, in December 2011, the discharge at Condes raised from 25 to 125 m3/s in 24 hours. 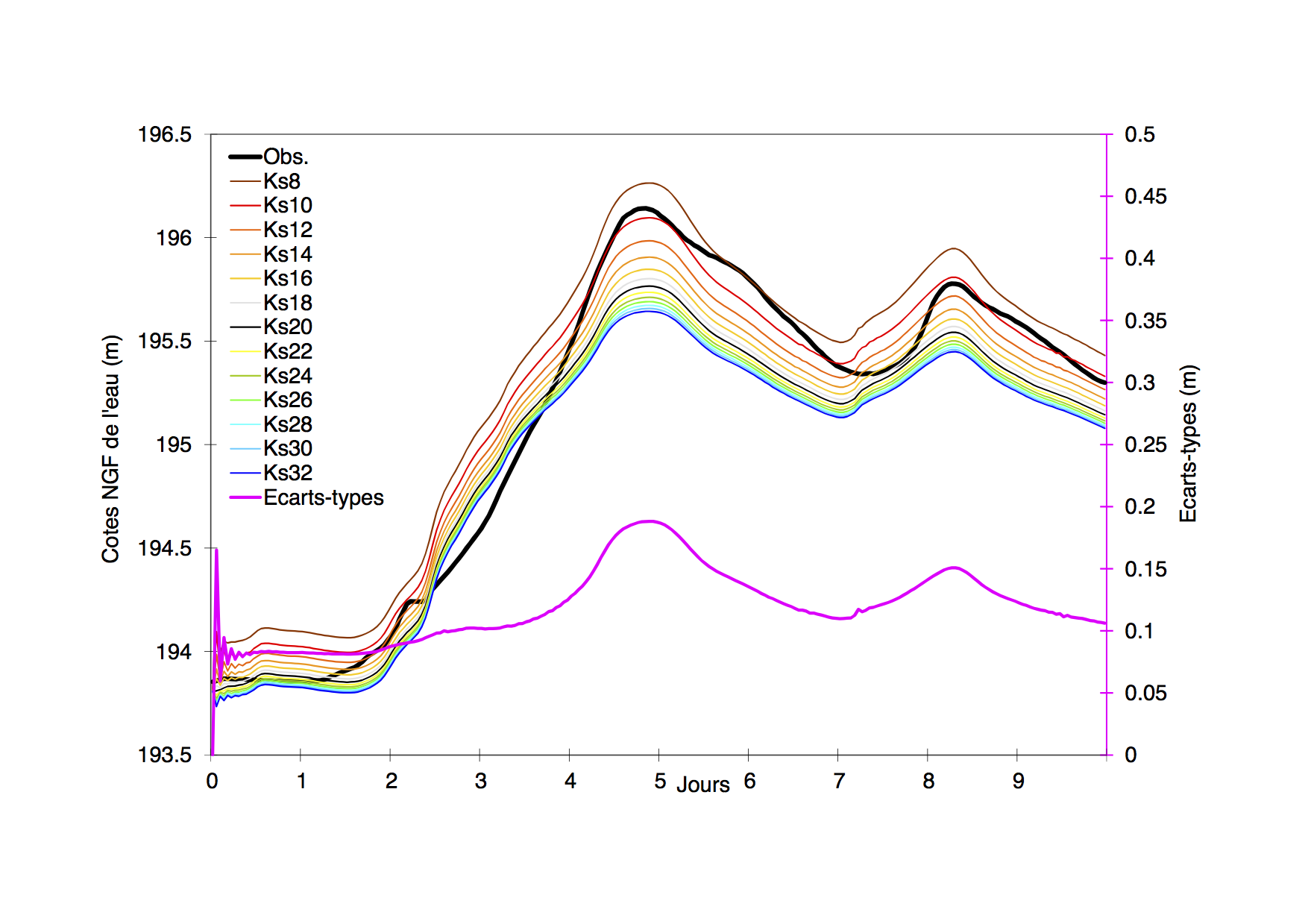 DAMP enables the assimilation of hourly discharge observations to correct inflows to the hydraulic network, then water level observations are sequentially assimilated to provide a time-dependent correction of the friction coefficients that accounts for errors in the friction and bathymetry description. These errors vary along with the flow as water level reaches different portions of the described geometry of the river bed and flood plains. Sensitivity studies showed that the non linearity of the water level with respect to friction coefficient is small enough (left figure) for the Extended Kalman filter algorithm be provide satisfying results. DAMP is used operationally at SPC SAMA for 2 sections of the Marne River for operational flood forecatsing. More details are given in Habert et al. 2015.

The Adour catchment is located in the South-West of France and its surveillance is taken care of by SPC GAD (Garonne Adour Dordogne). The maritime hydraulic network covers 161 km, it is represented with the 1D hydraulic model MASCARET, it is composed
of 7 reaches with 3 confluences and 3 dams. The upstream forcings are described by observed water level converted into discharges by rating curves at the stations of Dax, Orthez, Escos and Cambo. The downstream forcing is given by water level at the observing station of Convergent on the Atlantic ocean cost.Since the rating curves are build from a limited number of water level and discharge measurements and are usually extrapolated for higher flows, there are significant uncertainties related to the upstream boundaries.
Water level observations are available hourly at Lesseps, Urt, Pont-Blanc, Villefranque and Peyrehorade are assimilated with DAMP to successfully correct inflows to the model and hydraulic state that provide an improved water level and discharge as initial condition for short to medium forecast.

Complementary work was achieved in the framework of S/ Barthélémy’s PhD that implemented on ensemble based Kalman filter that allows for the temporal evolution of the background error covariance statistics. It was highlighted that the caracteritics of the network such as bathymetry and forcings have a major influence on the spatial correlation functions; for instance correlation length scales significanlty vary over time especially for extreme events.

DAMP was applied over a reach of the river Garonne measuring about 50 km, between Tonneins, downstream of the confluence with the river Lot, and La Réole. This part of the valley was equipped in the 19th century with infrastructure to protect against floods on the Garonne which had heavily impacted local residents, particularly since the historic flood of 1875. A 1D Mascaret storage area model with 15 storage areas representing the floodplain beyond the dykes and some 75 hydraulics links representing zones of exchange (banks, dykes, weirs) was developed at LNHE (EDF). This reach is equiped with 3 observing stations at Tonneins, Marmande and La Réole (upstream limit of the maritim influence from the Gironde estuary). As an indication, the annual mean flow in the Garonne at Tonneins is around 600 m3/s; bank-full discharge in the main channel is around 2,550 m3/s and bank-full discharge in the overbank flow channel between dykes is around 3500 to 3800 m3/s. This model was distributed to the hydraulic community by LNHE for a uncertainty quantification and data assimilation comparative study among several institutes, in 2012. We focus here on the December 1981 flood event that was one of the 10 most powerful observed on the Garonne river since 1875, and established a benchmark in the watershed (maximum discharge estimated between 5,400 and 6,500 m3/s).

It was shown that DAMP, applied for the river-bed model only, enables for the correction of the upstream forcing at Tonneins, the friction coefficients in the neighboring of Marmande as well as for an efficient sequential correction of the water level and discharge. Never the less, it should be noted that the flood peak is still under estimated probably due to an eroneous description of the geometry of the river in the Marmande area. 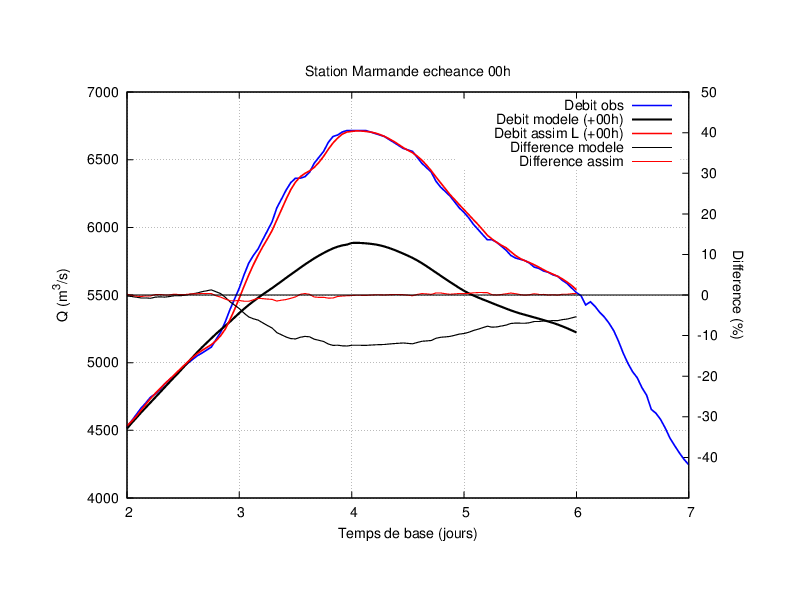 Correction of upstream flow at Tonneins with assimiation of discharge observations at Marmande for December 1981 flood event. Model without assimilation (black line) underestimates the observed flood peak (blue line). The DA analysis is in red.

Welcome to DAMP's webpage dedicated to data-driven river hydrodynamics modeling derived from a collaborative work between CERFACS, EDF R&D and SCHAPI! Do not hesitate to post comments and to contact us!Read more